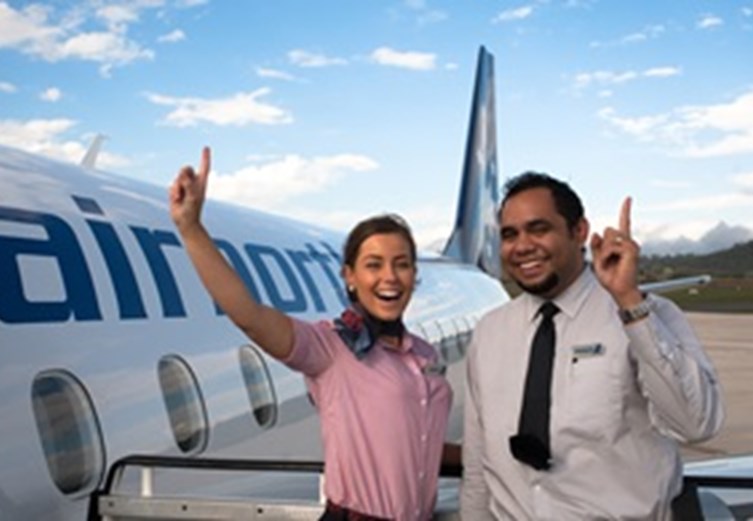 Toowoomba locals Sarah Parker, 22 and Kenneth Torres, 31 have clocked up almost 1500 hours over the past year travelling the skies of Queensland, Victoria and the Northern Territory.

The pair was the first crew members to join Australia’s second-longest running airline, Airnorth, when the Darwin-based carrier started operating services between Toowoomba and Melbourne out of Brisbane West Wellcamp Airport a year ago today (March 14, 2016).

The Toowoomba-Melbourne service signalled a major expansion for the company and its first foray into Australia’s southern market.

Further services between Cairns and Toowoomba will increase during Winter this year.

“We are meeting the growing demands of our customers and the team is extremely happy to celebrate our first anniversary partnership with Brisbane West Wellcamp Airport,” said Mr Bowden.

“The connectivity is limitless and we are excited to be able to help the business and leisure market travellers with convenient travel options right on their doorstep,” said Mr Wagner.

To further cement the connectivity Airnorth has created between Cairns and Toowoomba, a group of South West Queensland travel agents will be spend the next week in the region.

“This will be the first visit to Tropical North Queensland for many of the agents, and it will give them a fantastic opportunity to experience first-hand the beauty and diversity of our region.

“Tropical North Queensland is regarded  as one of the best places in the world to engage with nature, and agents will certainly have the  chance to put this to the test,” she said.

The agents will spend the week travelling on three different itineraries from Mission Beach in the south to Cooktown in the north, which will include the iconic World Heritage listed Wet Tropics Rainforest and the Great Barrier Reef.

“They will also spend time getting up close with our wildlife, immerse themselves in our indigenous culture and sample the tropical lifestyle we as locals enjoy everyday.”

Airnorth operates three times a week between Toowoomba and Cairns, providing the perfect holiday option as temperatures started to fall in the south, Ms Wilson said.